TELEFUNKEN M80 Gold Dynamic Microphone Comes with a variety pack of 6 TELEFUNKEN guitar picksAre you looking for that special microphone? The one that will make your friends jealous? Do you want a mic that not only looks flashy but sounds great too? Well look no further than the M80 Gold. Designed at the request of the pop-punk band AFI, the M80 Gold was originally slated to be a limited edition, but we had such a demand for them we decided to add it to our Dynamic Series.

AFI fell in love with the M80, not just because of its performance, but also its durability. “The lead vocal mic hits the stage about 5 times per show, and not only did the M80 not break, but the one that hit the stage every night sounded exactly the same as the other 3 we use at the end of the tour !! Amazing !!! And the gain before feedback is the best I have ever experienced. I will never use another mic on stage for vocals !!!” says Jamie Rephann (FOH for AFI, ZZ Top, 311, etc.). After just one tour, they were convinced. So much so that they have ordered 2 Special Limited Edition Gold M80s to match not just their set, but their vibe.

TELEFUNKEN Elektroakustik has created the M80 to give the user a superior alternative to the midrange-laden character of the “industry standard microphone.”

Featuring a wider frequency response and higher SPL capabilities the M80 delivers condenser-like performance in a rugged dynamic design, producing a microphone equally suitable for voice, instruments or drums on both stage and in the studio.

Due to its low mass capsule and super thin (yet surprisingly rugged) capsule membrane the M80 presents a wider range of emotion from a live vocal with an intimacy that has been traditionally reserved for studio quality condenser microphones.

The head and capsule assembly has been designed to reduce proximity effect to which nets added low end clarity for vocals, while still providing “strength” and “authority” and an “open,” “airy” character without adding danger of upper midrange feedback or “honk.”

The M80 also features an American made custom wound impedance matching transformer which is where the magic really takes place. When coupled with our proprietary capsule assembly, the results have won hearts and minds in far less time since it’s introduction than we ever imagined possible.

Following the M80 Chrome, TELEFUNKEN Elektroakustik naturally proceeded to the next idea in custom designs: the M80 Gold! The M80 Gold shines with a vibrancy that no one can ignore; it’s sure to catch everyone’s eyes! If there is any color that shows the M80’s worth in quality, this is it.

Featuring a wider frequency response and higher SPL capabilities the M80 delivers condenser-like performance in a rugged dynamic design, producing a microphone equally suitable for voice, instruments or drums on both stage and in the studio. 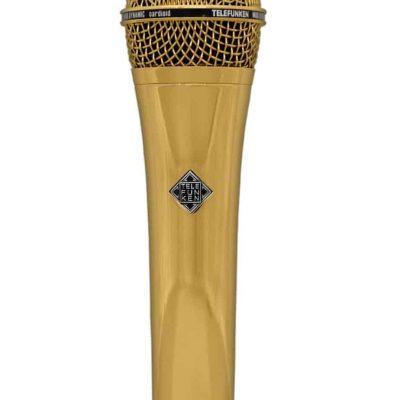