“It’s really impressive how the Phonitor 2 manages to keep the tone intact even at high pressure sound levels showing no ear fatigue and no problem in unleashing all the dynamics present in the source or in the song you’re listening to.”

Francesco Donadel Campbell, Headphones and around

We are uber-happy to introduce the successor of our legendary Phonitor 2 headphone preamp. We have kept all proven features while incorporating some major improvements — as such, the new Phonitor can be used as the ultimate monitor controller and preamp for three different sources. Likewise, we revised the 120V Rail Technology in order for it to perform better, which resulted in our measurement gear being outclassed. Even our creative team got even more creative and came up with a fascinating name: “Phonitor 2”.

When we brought out the first Phonitor back in 2008, the professional audio world seemed to have been eagerly awaiting it. The success of this unique headphone preamp was overwhelming. It combined a monitoring controller with a headphone amplifier that had provisions that made it possible to reliably mix on headphones. Ever since we call this new species a „Headphone Monitoring Amp,“ which inspired the product name itself: Phonitor.

Interestingly enough, the Phonitor not only became best friends with thousand of professional users, it also won a lot of fans in the Hi-Fi community.

But that was by no means a coincidence — ultimately, the Phonitor can be counted among the best headphone preamps in the world thanks to our unique 120V Rail technology. With its exceptional technical specifications and a huge power margin, it can reproduce any musical material without the slightest modification. Hearing fatigue is drastically reduced. Given all that, it was easy to understand the enthusiasm with which musicians, sound engineers and music lovers received the Phonitor worldwide.

Many Phonitor users told us they wished they could also use the unmatched signal quality that the Phonitor provides to feed their speakers. The Phonitor 2 is a full-fledged stereo preamp that could become the heart of modern professional and home systems alike where headphones have a preeminent importance. Moreover, we have achieved enormous advances with our 120V Rail Technology, making the technical specifications of the Phonitor 2 a new standard in all respects: 141dB dynamic range, 107dB signal-to-noise ratio, -112/-114 dB THD (headphone/speaker output with +30dBu output level). Mind you, the THD measurements define the limits of the measuring equipment but not those of the Phonitor 2.

The Phonitor 2 remains first and foremost a headphone preamp, which is easy to identify given the elaborate loudspeaker simulation for headphones. It works seamlessly with low-impedance headphones with load impedances as low as 10 Ohm (40 Ohm with balanced headphones).

If there is the need for more than one stereo speaker set, we recommended to use our passive switcher called the Expansion Rack.

To control the volume you can use any IR remote control: the Phonitor 2 learns your remote’s signal.

Phonitoring: With And Without Magnifiers

Already for the headphone monitoring – or phonitoring – part alone, the Phonitor 2 encompasses advantages of both kinds of traditional monitoring methods: On one hand the analytical headphone monitoring is like working with an acoustic magnifier but without external room influences; on the other hand, loudspeaker simulation allows for monitoring which  forgoes the microscopic effect, but provides for room ambiance.
Working with the magnifier effect of headphones has the advantage of safely hearing clicks or similar defects and helps in fine tuning crossfades or to judge tonal problems in individual tracks. On loudspeakers such analyses are much more difficult, as such problems just are not as apparent when one is working without being able to “zoom in” aurally. Conversely, loudspeakers provide monitoring with the advantage of spatial balance in a (definable through placement) stereo width, which in turn provides the illusion of an acoustic stage.
Traditional headphone reproduction produces one 180-degree stereo width in the middle of the head, and it is exactly this which creates the very problematic-to-impossible headphone mixing environment. An essential reason for such unnatural ambiance is the complete separation of the channels, which does not exist either in natural hearing or in stereo loudspeaker reproduction. This makes it nearly impossible to judge tonal balance, a stereo image and the phantom center level. Panorama adjustments as well as related EQ settings that one attempts with headphones, typically just do not function on loudspeakers.
Moreover, what is often called the “super stereo effect” with headphones usually creates a great deal of ear fatigue in the long run. Over loudspeakers the sound stage is felt in front, while in contrast, when monitoring through headphones, the stage is present on the left and on the right – but frontal and rear information is lost.

The End Of Ear Fatigue

Aside from these unnatural headphone ambiance there are further disadvantages with fatigue when mixing or listening with headphones. First, some cans themselves may not be that comfortable to wear …

Moreover, a standard headphone amplifier is often an additional important reason for premature ear fatigue. Almost without exception, present-day headphone amplifiers employ comparatively undemanding IC’s. In the best cases they might work with symmetrical voltages of +/-15V to +/-18V, and in less favorable cases, with only a simple supply of 9 or 12V from cheaper external “wall-wart“ power supplies.

But the voltage level acts in circuitry much like the cubic inch capacity to the productive power of a combustion engine: Cubic inch capacity is replaceable with nothing but more cubic inch capacity – and in the productive power of electronics, voltage level functions similarly.
For some years, now, SPL has addressed this issue in all of its mastering product series through its own specifically developed 120 volt technology. Consoles and signal processors of the SPL Mastering Series appear as central elements in installations of today’s most renowned mastering houses (for example Bob Ludwig’s Gateway Mastering & DVD in the USA, Simon Heyworth’s Super Audio Mastering in Great Britain, the Galaxy Studios in Belgium and the legendary Wisseloord in the Netherlands). This 120 volt technology is based on discrete operation amplifiers from SPL’s own production, developed and perfected over many years by SPL’s co-founder and chief developer, Wolfgang Neumann. These OPs work with high-performance semiconductors in Class A technology at a symmetrical voltage of +/-60V.

The Phonitor 2 is the first unit to employ the 2nd generation of our 120V OPs with improved specifications once again. They have Signal To Noise Ratio of 116dB and offer a nearly 34dB headroom – that yields an unequalled 150dB dynamic range.

The musical result is not to be mistaken: Regardless of the monitoring means, regardless of how loud you monitor – the Phonitor 2 always remains a distant, impartial factor unaffected when used to capacity and beyond being overloaded. The phase stability is always perfect, its THD next to immeasurable.

The Phonitor 2’s OPs cannot be stressed in the most stressful circumstances, and for precisely this reason its musical sound is always relaxed and spacious. All frequencies are reproduced in balance, basses are stable and tight, mids are clear and differentiated and highs remain transparent and soft. Particularly striking is the fact that you can easily listen to every detail. Hearing fatigue makes it usually harder to carefully listen to and understand complex signals over a long period of time. The Phonitor 2 reverses this situation turning it into a pleasant listening experience that leaves you longing for more.

Even the best audio measuring equipment arrives at the boundaries. In same situations we ended up just measuring the Audio Precision Cascade 2 measuring device and we cannot say how good the 120V Rail Technology actually performs.

These diagrams show how our 120V Rail Technology compares to other circuits.

When it comes to volume, the 120V Rail Technology exhibits a performance, in regard to maximum level and dynamic range, that is twice that of common components and circuits given that its values are approximately 10dB higher.

THD measurements of the 120V op-amp show a difference of more than 3dB compared to the OPA134 at 36V — in terms of sound pressure level, that corresponds to an improvement of more than 50%.

The operating level most commonly used for audio equipment is 30 volts. 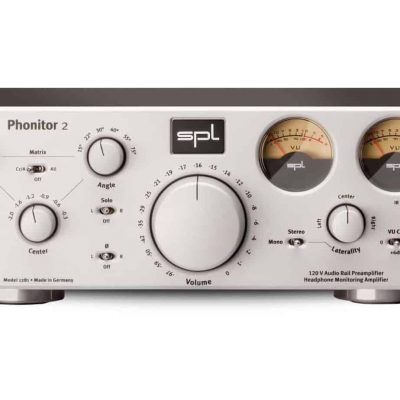