Precise surround control, versatile downmix balancing and mix monitoring for accelerating and enhancing your surround productivity. Halo Downmix is the glue that brings your workflow together, allowing you to deliver in surround and stereo with ease and without compromise.

A standard downmix is usually generated by simply mixing together the surround output according to standard downmix coefficients, however, this can often lead to unsatisfactory results, particularly if legacy upmix practices have been used to generate the original surround mix. Halo Downmix can be quickly employed to mitigate these issues eg. controlling excessive diffuse sound from added artificial reverberation, or removal of delay artefacts introduced in the rear channels.

– Stereo Mix production for Television within a Surround workflow.
– Rapidly producing a controlled, precise stereo downmix of a 7.1 feature film.
– Generating a stereo mix from surround where no stereo recording exists.
– Producing stereo interim listening mixes in a surround workflow.

Adjust existing 5.1 or 7.1 mixes in surround-to-surround mode. Levels of individual channels, and balance of direct vs. diffuse sound can be adjusted to fine tune or re-balance existing surround audio where access to the original mix is not possible.

Halo Downmix can also be used in conjunction with the included Receive plug-in to enable a parallel surround/stereo workflow.

This workflow allows for rapid A/B listening checks between surround and stereo downmix. 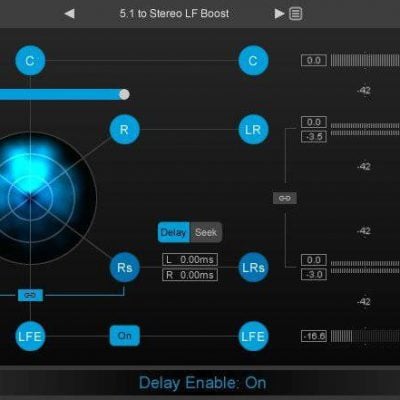