“[email protected]*ks with the Fabric of Time”
The H910 Harmonizer® was the world’s first digital effects processor. With its unique combinations of pitch shifting, modulation and delay, the H910 can be heard on countless ground-breaking works by artists from AC/DC to David Bowie to Frank Zappa. Simply put, nothing sounds quite like it.
A powerful creative tool, the H910 plug-in is a faithful recreation of the original hardware. Use the H910’s pitch changing ability to create specific musical intervals and perfect harmonies, spread guitars, fatten snares, apply subtle organic de-tuning to synths or add slap-back delays to vocals. At extreme settings, you can create unheard-of mechanical sounds, drone effects or robot language using self-oscillation, delay, and anti-feedback.
Two is Better than One
When you purchase the H910 Harmonizer® plug-in, you also receive Eventide’s exclusive H910 Dual Harmonizer®. This version recreates the popular technique of running two H910 units in parallel to create lush doubling and other interesting effects.

NEW Keyboard and MIDI mapping – The original H910 featured a keyboard remote control which was used live by several artists including Elton John. With the H910 plug-in you can easily use MIDI to control pitch and harmonization in real-time.
NEW OUT2 Delay Group – adds inspiring attributes to your sound.
True analog modeling of highly nonlinear electronics for faithful reproduction of the original H910’s juicyness and grit.
Perform perfect pitch changes controlled manually, via MIDI or with Anti-Feedback.
Anti-Feedback modulates the pitch around unity for a subtle or wild effect.
Optional “glitching” of original H910 hardware to create unpredictable sounds as it alters pitch.
Modify pitch by musical intervals (diatonic) to harmonize vocals or solo instruments.
Delay rhythms and melodies to create everything from slap-back echoes to feedback chaos.
Create colorful, unique sound effects and drones through self-oscillation.
Individually control delay outputs and dry/wet mix.
Mix Lock allows for scrolling through presets or settings while keeping the dry/wet mix constant.

Recreates two H910 units running in parallel to create doubling effects and other unique sounds.
Easily fattens and thickens instruments when assigning opposite pitch ratios.
Stereo (cross-unit) Feedback can cause the incoming signal to shift up and then down continuously. 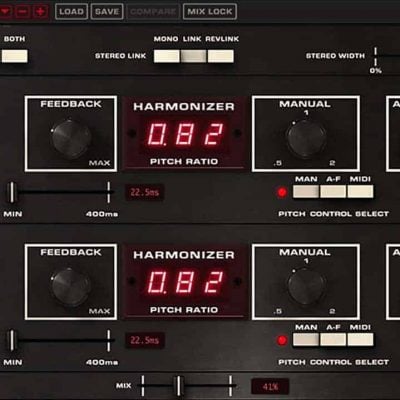