A cinematic and ethnic vocal tour-de-force.

EastWest/Quantum Leap present VOICES OF THE EMPIRE, a brand-new vocal product that is perfect for epic film/TV/game soundtracks, EDM, or any music requiring solo vocals or vocal harmonies using chords. Featuring the raw, primal vocals of Uyanga Bold, VOICES OF THE EMPIRE will make the perfect companion product to the newly-released blockbuster HOLLYWOOD CHOIRS

Uyanga Bold is a unique talent, melding the ethnic musical traditions of Bulgaria, Serbia, Mongolia, and beyond. She is a trained opera singer with perfect pitch, fluent in Russian, Mongolian, French, English, and German. It’s East meets West like you’ve never heard before. Her voice is beautiful, pure, otherworldly, haunting, unsettling, powerful, genuine in its ethnic flair and world class in its precision.

Uyanga Bold has taken the world by storm since she appeared on the scene, recently touring with Hans Zimmer with his live performances of the score from The Dark Knight. Forbes Magazine wrote “her voice harkens back to ancient civilizations” and she has been nominated as “Female Singer of the Year”. She has appeared internationally on television, radio, and in live performances, reaching over 25 million views across all platforms.

From the most awarded producers in the sounds industry, DOUG ROGERS and NICK PHOENIX, VOICES OF THE EMPIRE is available for purchase or as a free addition for all subscribers of , EastWest’s multiple award-winning subscription service that has revolutionized the virtual instrument industry.

instruments playback true legato intervals when playing two connected notes for every interval up to an octave. Available in traditional and Mongolian styles.
instruments combine multiple articulations into a single instrument that uses the Mod Wheel (CC1) or Velocity Sensitivity to determine which of the different articulations will playback.
contain performances of specific words mapped across a 2 octave range. Use the Mod Wheel (CC1) to start the word at the beginning or an alternative start time.
contain a total of 254 phrases sung in western and non-western styles. The average is 21 phrases for each of the 12 root keys. Although they were originally recorded to a tone in each key, they are improvised, and therefore random in nature.
instruments combine multiple articulations into a single instrument, and use keyswitches to switch between them. There are keyswitch instruments for Legatos, Melismas, Phrases, Sustains and Words.
Download the Manual for more information.

VOICES OF THE EMPIRE requires PLAY 6 (including a new instrument search database and other new features), which is compatible with all PLAY products, and is included free with your purchase or subscription.

VOICES OF THE EMPIRE is a must-have vocal collection for composers and musicians looking for the best vocal sounds for their next project. 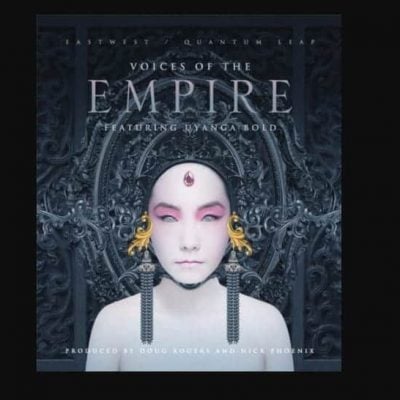