Mongoose lets you solidify your low end by collapsing your bass frequencies to mono. Out of the box, you will get a tighter, more focused low end. The clear, simple layout makes it so it couldn’t be easier to dial in the exact sound you need.

The problem exists because of the way our ears and brains are used to hearing sounds naturally. With low frequencies, we can’t really detect where a sound is coming from. It’s the high frequencies that lets us know where a sound is coming from.
This can lead to some major issues when mixing on monitors. You might have some low frequencies that are coming out of only one speaker, and you won’t be able to tell. Put on headphones, and it becomes immediately obvious that there is a problem. You can feel your head instinctively turn as your brain tries to figure out why the low end sounds so unnatural.
This is where Mongoose comes in. It takes all those wide low frequencies and puts them right in the middle where they belong. The result is a low end that translates better to headphones and 2.1 systems, and just provides a tighter, more natural sound overall.
This plugin really couldn’t be any easier to use than it is. Just set your crossover frequency, and everything below that is summed to mono. You can also fine tune how wide the stereo image is by adjusting the width knobs. This is the kind of plugin that should automatically be on every master bus.
See it in Action — Extreme panning with Mongoose

I am already using Mongoose in my projects!! Thanks for this simple but amazing tool. I even reopened an album that was “completed” and added mono (and now Mongoose) as-is onto the master buss…Wow, the mix got cleaner, more focused. With very little tweaking per song, I decided to submit new masters to my Mastering Engineer. THANKS for this plugin.

The description says that this plug is effective right out of the box. The description is spot on! I have used this on the master bus of 3 mixes thus far. The default setting made the mix punchier and clearer right off the bat.

Wow, I’m impressed on how much this plug-in really cleans up the mix and tightens up the bass. I’ve used stereo width tools and M/S processing before but this plug-in really does something to the mix that I wasn’t expecting, in a very good way. The stereo width is amazing and the clarity of the instruments are very noticeable. I just tried it on 3 of my mixes and with very little effort it made a significant imprvoement This plug-in will be on everyone of my mixes going forward. Keep up the great work Boz!

This tool!…. THIS TOOL!… crazy, just wow-tastic!
I….there is….you can….wow, wow wow — just wow.
Monogoose is the only plugin loaded with my Ableton Live project. I strongly recommend to invest the 25$ for this tool!
Big respect to the BOZ-Bros for this!

I really can’t imagine not having this on the mixbus now. Probably the best $25 you could spend to really breathe life into your mixes. Tightens up the low end incredibly well. You can blend it in just a little to open things up, make the Kick and Bass lock in the middle and give your instruments some air, or you can really open it up wide and give every sound the whole countryside to roam in! Works well on drum sub mix or stereo pads, keys etc too. Used it on a brass track and vocals to good effect. Been using it on guitar bus as well to either beef up the bottom end, or tame some of the mud. Can’t praise this thing enough. There isn’t any other plug in that can do all this so easily and so effectively for such a small price. Love it!

its amazing i only bought it bacause i had to 2 freebys only joking lol…then one day i sent boz an email and her replied and i thought great customer service..then somone online said that this plugin was great on the 2bus for getting a tighter bottom end..your right it does.. i dunno how it works but it will be on every mix from today ! buy buy buy.. RB

Buy it right now…
I was like “ehh, should I buy that?” for months. When I caved on the Imperial delay intro price, I figured hell, I’ll just drop the 25 bucks and throw this in as well.
Honestly, all I expected was a bit more clarity, but what I got was a huge boost to perceived loudness, clarity, and the whole thing was a million times tighter.
Forget multing stuff out! Just throw a mongoose on there. Seriously though… blown away.

Great and simple plugin, does what it says on the tin with the minimum of effort. I actually had this for about a year or so but never got around to trying it out, how silly! It now lives in my template, will be using it everywhere!

Love this one too, and sooooo tempted to keep it a secret… I’ve been A/B-ing and now realize that it is one of those plug-ins that’ll just stay instantiated all the time.
—
Coolness,
Duane

Amazing plugin, cleans all of the mix. No muddiness, huge low end and clarity. Thank you Boz Digital family for this big plugin.
The price is also unbelievable.

Very nice plug in… well worth it. I don’t use it on the master buss, but I DO use it for the master drums buss and WOW what a difference. Controls are very easy to use. Tweak those knobs and you’ll hear the difference. Tightens up the bottom end nicely. Well done!

Mongoose is just awesome. There are so many uses for it! I use it on many tracks, especially on some moving stereo synth tracks that definitely need to be stabilized due to their heavy bass content bouncing around all over the place. Mongoose will keep those low frequencies in the center where they belong, then you can eq the sides, widen them…..anything, and then the synth then becomes BIGGER and BETTER!!!!!! On a master bus the whole darn mix just jells….amazing plugin….worth every dime….they should charge more!!!

Mongoose always sits on my mix bus before the limiter. Every mix. 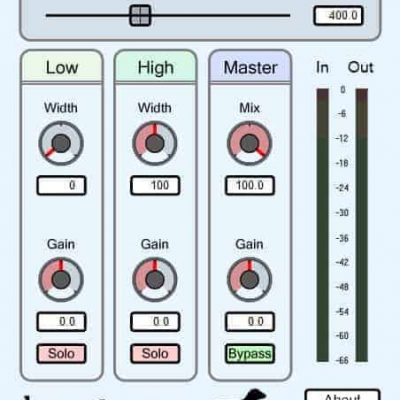